What do Boston and Books have to do with each other? Besides the obvious fact that they both start with B?

Go on over to my other blog, Simply Put, for the simple answer. Hint: it has to do with dreams coming true.
Posted by christine M at 3:37 PM No comments: 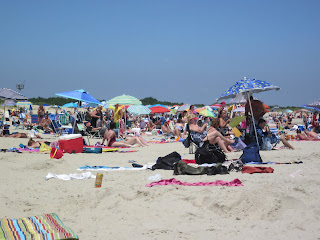 Yeah, I still exist. I guess most of my ruminating has been on Facebook lately.

Yesterday we spent the day at the beach. Today we are spending the day suffering from sunburn. Yes we used lotion. No we weren't as diligent with it as we should have been. Lesson learned.

I also guest posted at YA Authors You've Never Heard Of today and talked about required summer reading - that bane of all students.

Wouldn't it be great if a summertime assignment, instead of making a child read a book they are not interested in, was to have at least one adventure over the summer and be prepared to tell about it.

It can't be assumed anymore that kids will have climbed a tree or gone on a picnic or taken a long hike in the woods. But those kind of things can really be just as educational as reading. And even better, if a child gets to experience something for real, when they read about it in a book they understand the story that much better.

So go. Have an adventure.

And then read about an adventure.

Both are good for you!
Posted by christine M at 9:36 AM No comments: 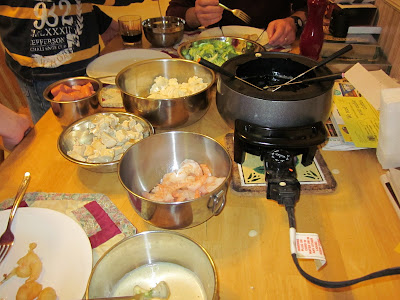 We started our New Years with our traditional New Years Eve tempura fondue. We followed that with a board game (Chocolate Monopoly - yum) a movie and then watching the ball drop while drinking sparkling cider. No one can say we don't know how to have a good time.
Today we got together to celebrate Christmas and New Years with family and friends . A gathering that was bittersweet due to the number of people who couldn't make it this year, and also because my parents (who hosted the party) are moving out of state next week.
Lots of changes coming.
But it's a New Year full of possibilities.
Happy New Year.
Posted by christine M at 9:18 PM 2 comments:

Thoughts from the Weekend

A few random thoughts from over the weekend.
1) The kids asked to wash the car. We don't have a pool and it was hot. This was their way to get to play with the hose. Since the car hasn't been washed in ages and probably still had road salt on it along with all that pollen, I certainly didn't argue.
After awhile I went out to check on them and they'd been joined by two neighborhood girls. They were all having a blast washing my car. When one of the girls left she thanked me for letting her wash my car. Anytime, sweetie, anytime.
2) Once again we went to watch the Memorial Parade that goes past my parent's house. Since my parents have bought a new house and this one is for sale, this will most likely be the last parade we watch there. All good things must come to an end.
Waiting for the parade: 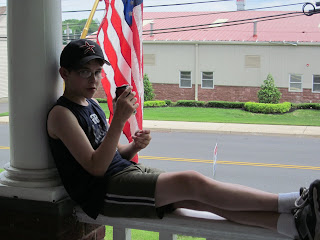 Waiting for the parade people to throw candy (it's all about the candy): 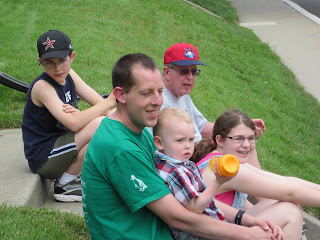 Funny note about the candy. When the little league kids went by - they were of course tossing candy. All except for one kid who was running around picking it all up and stuffing it in his pockets. I guess he figured there was no reason to miss out on the loot just because he happened to be in the parade.
3) And finally a picture of gratuitous cuteness. My nephew with that look of "Who me?" 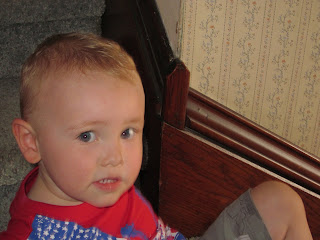 Posted by christine M at 2:10 PM No comments:

Poetry Friday over at Simply Put

I'm finally participating in Poetry Friday again, largely because my 14-year-old gave me some new poems she wrote. But I'm participating from my other blog. So head on over to Simply Put and check out "Pippi's" latest poem.
Posted by christine M at 9:19 AM No comments:

I belong to a couple of groups on Facebook that are for alumni of the elementary school and middle school I went to. Recently people have been reminiscing and the subject of "The Teacher's Strike" came up and it got me thinking.
Before I go any further let me say that there were two teacher's strikes while I was a student in this district. One was when I was in fourth grade, the other was when I was in sixth grade. At least one of them lasted a couple of weeks. The one in fourth grade included the first day of school: my first day of school in a new school and a new town. These things may color my perceptions some.
I also want to make it clear that I have no idea what the contractual dispute was about. I do not know if the teacher's were being reasonable or not.
But here is what I do know. During one of the strikes a teacher spit at a child (kindergarten I believe) who was crossing the picket line by going to school. During one of the strikes as remembered by someone on the Facebook group, the teachers would hit the side of the bus (filled with their students) as it crossed the picket line. After the second strike my sixth grade homeroom teacher had to spend several days in jail for being one of the leaders and defying a court order to return to work.
I didn't know what the strikes were about and I didn't care. I knew that the teachers, the people we were supposed to respect, were breaking the law and were being mean. How are you really supposed to command respect of the students in your class if they first see you being abusive toward them?
Remember, students who crossed the picket line were not doing it because they wanted to. It was because their parents still sent them to school. (We had half days, with substitutes and probably learned absolutely nothing.) Most students, if given a choice, would gladly have stayed home and enjoyed an extended vacation.
So maybe the teachers were really directing their abuse at the parents? Not really any better from the young student's point of view.
I respect worker's rights to dispute contracts. I respect that often a strike is the most effective way to make changes.
But I did not respect teachers that behaved that way toward elementary school students.
Was their cause right or wrong? Honestly, I have no idea. But their behavior was wrong and that's the lasting impression that was made on me.
There's a life lesson there. Even if your cause is just and worthy, you can still undermine it by spitting at the kindergarten student.
Posted by christine M at 9:29 AM No comments:

Today for my post over at YA Authors You've Never Heard Of, I wrote about people bemoaning the lack of the "classics" in high school English classes. But does being forced to read a 100-year-old book, just because others have read it before you, really have a benefit?
From the comments it also seems that simply not being forced to read something specific is what encourages readers.
Head on over and join the conversation!
Posted by christine M at 10:54 AM No comments: