Back in the spring of 1975 my family moved. We moved from a cluster of friends where - as my mom once described it - we grew up in each other's houses - to a town about an hour away.
As New Year's Day approached one of our old friends invited us and another family to dinner on New Year's Day. It was wonderful fun to see our friends again - between the three families there were nine children who at that time ranged in age from about 13 to 2. There were complaints that there were no radishes - or not enough radishes - or something in the salad (this actually became important later).
When the evening was over one of the other families said "Next year we'll do this at our house."
This year it's at my mom's house. That's right. 2011 and a tradition started in 1976 is still going strong. 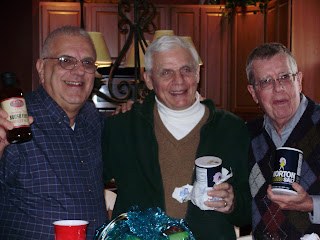 There are traditional gifts: Radishes for my dad who once complained that there weren't enough radishes. Every year he gets radishes now. It wouldn't be New Year's without them. Bananas from my Mom to the other families because one summer when we were all at the shore she kept pushing bananas on everyone until it became quite the joke. The sailors get salt - because they are old salts. Someone else gets hot pepper jelly.
The players have changed somewhat. Those nine children have grown up; gotten married - one tragically died way too young. Some have moved away so getting to the party isn't alway possible every year. Each year, whoever can make it does.
There's a whole new generation of children. Ranging this year from teenager down to toddler.
There are the millennium boys. New Years 2000 we have a picture of three of us, looking very pregnant. Our sons were all born within the same week of February. Fun for boys of that age to have friends who are the same age - almost exactly. 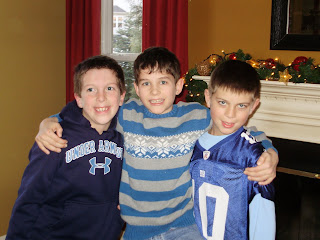 The woman who started it all, is no longer with us. She lost her battle with cancer over a year ago - and we all miss her terrible. But tomorrow we will gather and she will be with us in spirit and we will remember the way she was always cheerful and always made us laugh and how she started one outstanding tradition.
Happy New Years, everyone!
Posted by christine M at 11:39 AM 1 comment: