I Saw God Today
by Liz B

I saw God today.
He reached down
With a hand of ribboned sunlight
Through dark forbidding clouds
To touch the earth.

The light rays pushed back the clouds
To reveal the sun
And its brightness filled me
Then my room
Making me smile inside.

I saw God today.
Gold filtered down
Encompassing the sky and earth
Like loving arms; and with that
He returned my smile.

Now - I'm not going to say when this was written (if Liz wants to share those details it's up to her) - but I do have the author's permission to use it for Poetry Friday. Thanks, Liz.
Posted by christine M at 9:30 AM 1 comment:

The kids and I have been straightening the attic (I know based on the picture from the other day, maybe we ought to concentrate on other rooms - but so be it) and once we cleared a bit of space, they decided it made a neat club house.

Fine - go play in the attic - just don't fall through the ceiling is all I ask (there is not flooring over about half of the attic).

They found a shoe box up there that had remnants of toys from my youth in the seventies. I had looked in it yesterday - it was the flotsam of a generation - some Action Jackson clothes, a vest for a Flatsy doll, a wooden "Dish" from a "Cow Jumped over the Moon" mobile - and a plastic top that once came out of a box of Trix cereal. I had put the box aside to deal with later.

They came downstairs a few minutes ago and announced that they found the coolest toy.

"It's a Trix Top and it does tricks." They said, full of excitement. "When you spin it - it wobbles some and then flips over so it's spinning on it's other side. It's Soooo Cool."

They demonstrated the toy for me.

"You had the best toys," they said with a sigh and headed back upstairs.

They have computer games and stuffed animals that respond when you pet them. Trust me - they have lots of cool toys.

I guess it just goes to show you - sometimes simple is best.
Posted by christine M at 4:34 PM 1 comment: 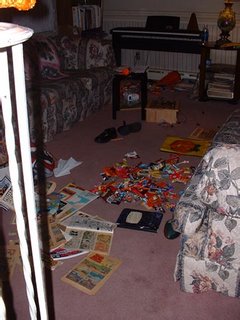 So, yesterday I walked into the living room and this is what I saw.

It was like a candy store and a comic book store had collided with each other.

In case you can't tell - there's a second pile of candy under the piano against the back wall.

Oh well, I guess it's a kids paradise.