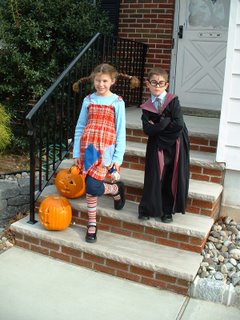 It's beginning to look a lot like Christmas. (cue music)

What? Don't tell me you haven't noticed all the Christmas decorations in the stores. And it's still not Halloween yet.

The retailers say they do this so that it will get people in the mood to spend for Christmas. And while I love Christmas and do buy presents, and it's fun to see the first decorations of the season - I don't want to see them in September.

And the same goes for other holidays (and big sales events too.)

For example putting Back To School supplies in the stores the week after the kids get out of school is just plain cruel. At least let them get a chance to sleep in a few days first.

The problem is that it becomes invisible to me. I have to ignore it because it is just so ridiculous. And then, it's October 20 something and I realize I still need Halloween candy. It becomes such a habit to ignore it that the fact that I do eventually have to buy it slips my mind.

Now, I'm not likely to forget that I need to get Christmas presents - but I would appreciate the first decorations of the season so much more if they were - you know - actually seasonal. Jack Frost nipping at the nose - the leaves off the trees - and ooh look there are Christmas decorations in the store. Instead I find myself sighing and saying "already?" And then by the time Thanksgiving rolls around the decorations are looking faded and old. We're tired of them already - and we still have a month to go.

Oh well. That's just my little rant for the day.

I haven't posted in awhile, because, basically I've had nothing too interesting to say. Hopefully that will change soon.
Posted by christine M at 3:10 PM No comments:

This evening, my husband was discussing something with me, and handed me an article to read on the topic. "It's a bit of a grey area," he said.

Our son piped up then, "of course it's a grey area, that paper is all in black and white."

In honor of the winds that blew in the cold temperatures last night, here's a little Robert Louis Stevenson:

Windy Nights
Whenever the moon and stars are set,
Whenever the wind is high,
All night long in the dark and wet,
A man goes riding by.
Late in the night when the fires are out,
Why does he gallop and gallop about?

A couple of weeks ago we took advantage of a relatively free weekend and took the kids apple picking. This has become an annual tradition. One that we've perfected over time. We discovered an orchard that uses dwarf trees and trains them on wires, like grape vines. It makes it so that all of the apples are easy to reach - by everyone. It doesn't take long at all to acquire forty pounds of apples - that's a lot of apple pies, apple cakes, apple pancakes, and just plain snacking apples. 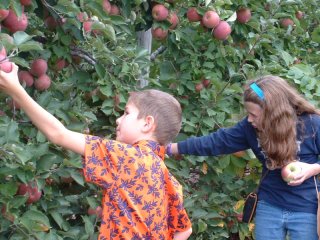 The other part of our annual outing is to take a walk to Pennsylvania.

That's not as hard as it sounds.

We go to Washington Crossing State Park and explore a little history. The park is actually on both sides of the Delaware River, and there is a bridge there with a sidewalk on it. We wander the New Jersey side, discuss Washington crossing the Delaware, sometimes check out the Ferry House if it's open, and then take our walk to Pennsylvania, where there is a little shop selling Revolutionary era goodies - and cheap candy. The kids get candy and we explore some on the PA side before returning home. 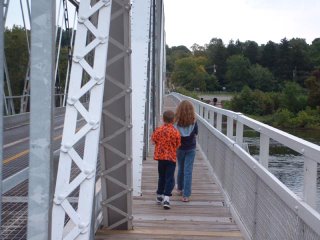 The kids on the walk back to NJ.


This year we got a late start, the Ferry House was closed when we got there, and it started to drizzle when we got to the PA side, so the trip was shorter than most. But it was still lots of fun.

And my kids love history - one year we learned that George Washington's favorite candy was rock candy. Made eating it that much more fun.
Posted by christine M at 12:46 PM 5 comments:

Why do they save the hard questions till late

when you are too tired to think straight and just want them to go to bed? That was the scenario yesterday, when my son said, "I didn't know the church was a woman."

Okay, I thought of "Holy Mother Church," and I made some comment on how we tend to think of it that way.

And he continued, "because the priest is married to the church."

"But a man can't marry another man," he answered.

Thanks for the Suggestions

We're off to the library to look up some of the books recommended for S both here and at Liz's place. Thanks to everyone. I'll let you know what ones he likes.
Posted by christine M at 1:44 PM No comments:

Last night I was washing dishes and looked outside and saw a beautiful full moon. Then I remembered it was the Harvest Moon. I called the kids outside to look at it. It was beautiful. My daughter, who is learning about weather in her Enrichment class said the moon was so bright because of the angle between the moon and the sun.

I decided to honor the beautiful sight with the following poem.

Under the Harvest Moon
By Carl Sandburg

Under the harvest moon,
When the soft silver
Drips shimmering
Over the garden nights,
Death, the gray mocker,
Comes and whispers to you
As a beautiful friend
Who remembers.

The rest of the poem can be read here.
Posted by christine M at 7:50 AM No comments:

I finished my revision - now I just need to see if it needs any more sprucing up before the novel is out in circulation again and looking for a publisher.

Two things I learned during the process:

1) lots of good ideas for other projects present themselves when you can't work on them - and dissipate when you can.

2) don't read anything by Meg Cabot while in final revision - everything she does is so spot on, it makes me simply want to throw in the towel.
Posted by christine M at 11:04 AM No comments: