I was thinking about technology the other day and how wonderful it is to have a world of information at my fingers via the Internet and Google.

When I wanted to make rhubarb-strawberry crumble, but didn't feel like sifting through my cookbooks for a recipe, I simply typed it into Google and found a recipe that worked for me.

When my son was hit by a baseball and complaining of serious rib pain, I looked up the symptoms for cracked ribs on the internet, and since they pretty much matched his symptoms, brought him to the emergency room (where, luckily his ribs turned out to be merely bruised.)

Want to know if the guy in one movie was in another, or when a book was written, or when the next book in a series is coming out. The internet provides the answers.

Does this make us smarter, I wonder, then people who lived a hundred years ago?

But then I think of the things a woman if a middle class neighborhood in a town in New Jersey would probably have been able to do 100 years ago, that I really can't lay claim to now.

She would have been able to make clothing for her children - and possibly for herself and her husband as well. In my defense I did make my daughter a sun dress once. She was four. She's twelve now.

She would have knit hats and mittens and scarves for her family. (I did crochet hats this year).

She would have a better understanding of natural cures for things. Instead of reaching for the bottle of medicine she would have concocted a poultice of some sort.

Not to say that there aren't people these days who do these very things; but most of them (especially regarding the chicken or canning) live in more rural conditions than I do. And would the woman from back then have been at a disadvantage in many other ways - of course.

But what are we losing?

When reading The Swiss Family Robinson I felt vastly inferior to that old-fashioned family that could be stranded on an island and immediately know what plants to eat for food and how to build themselves a liveable structure. Should I find myself in that situation, I'm much more likely to die of starvation or exposure. (So, I'll try to avoid that situation - why I never auditioned for Survivor)

There was another book I read once, The Harvester, by Gene Stratton Porter (and I could have long and lengthy discussions about this book, but I'll spare you) where the main character collects herbs for medicines. Is there anyone who knows that sort of thing anymore? Who can make usable medicines out of herbs growing in a garden. Is this information that was passed down from generation to generation to generation and is now simply not needed anymore.

It all just makes me wonder, what have we lost? If a modern, urban American, were left to live by his or her wits without Internet access or stores. Could we do it? And how much would we have to re-learn that our grandparents simply took for granted?
Posted by christine M at 12:19 PM 4 comments:

Movies have trailers. And now books do too. So, I've been thinking that When Mike Kissed Emma needs a trailer too.

Rest assured the real thing will be more polished, and it won't feature pictures of my kids. (Though Pippi thinks the one of Harry with the trombone should stay).

Posted by christine M at 5:01 PM No comments:

The LORD is a stronghold to him who walks honestly, but to evildoers, their downfall. (Proverbs 10:29)
Posted by christine M at 7:18 PM No comments:

'Cause That's So Much Better

"We used to play Terminator in gym class," said Pippi. "It's a lot like dodge ball. But they banned dodge ball because it was too dangerous."
Posted by christine M at 9:10 PM 7 comments: 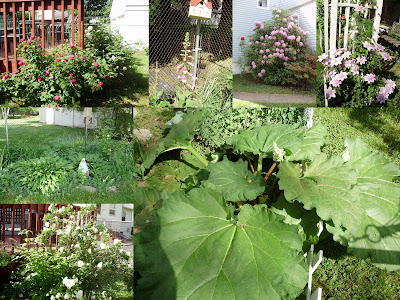 A little peek at my backyard gardens tells me that the roses are in bloom, the rhododendron needs to be cut back (see my kitchen window hiding behind it), the Mary Garden has been taken over by hostas and the rhubarb is ready to pick.

One of the Crowd

Pippi has never been one to care if she fit in with the crowd. She was always happy to go her own way, do her own thing. She didn't care if everyone else had these sneakers or did this thing. She did what she wanted and was happy about it.

That's why I was so surprised to hear her say, tonight, "but everyone else has them, I want mine now too."

Was she talking about a cell phone? (no, she already has one.) The latest designer clothes? (they wear uniforms at their middle school.) Her own laptop? None of these things.

The trip to the orthodontist today ended with "come back in four weeks, when that back molar has grown in more."

(I guess the days when kids were traumatized because they needed braces are long gone.)
Posted by christine M at 8:10 PM 1 comment:

The hope of the just brings them joy, but the expectation of the wicked comes to nought. (Proverbs 10: 28)
Posted by christine M at 10:58 PM No comments:

As Climbing Roses continues it's Prom Mania this month head on over there today to see what I had to say about my junior prom. Oh, yeah, there's a picture too - trust me, you don't want to miss this.
Posted by christine M at 5:11 PM 4 comments:

The fear of the LORD prolongs life, but the years of the wicked are brief. (Proverbs 10:27)
Posted by christine M at 5:05 PM No comments: 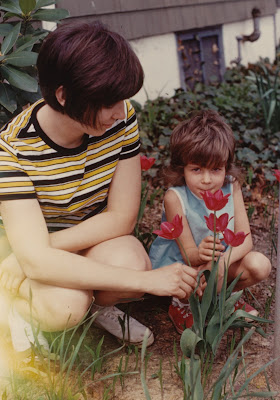 Here's a picture of me and my mom an unspecified number of years ago.

Mom taught me a lot, like how to stop and smell the flowers.

And she still teaches me every day about the right way to live, just by her wonderful example.

So Happy Mother's Day to Mom and all the mother's out there!

Over at the Climbing Rose blog there is a contest going on. Some of the Climbing Rose authors have their prom pictures up. Can you identify the author? Guess the year of the picture? Or even the decade? Pop on by and try your hand at it as Prom Mania continues.

And is my picture over there? I'll let you stop and by and see if you can figure it out.
Posted by christine M at 3:40 PM 1 comment:

Last night after days of rain, Harry actually played a baseball game. His team hasn't been doing that great. It's not that as a team they were really worse than the other teams, but between lucky breaks for the other team and silly errors on their side, they seemed to have trouble getting ahead.

Last night it was like their team finally figured out what they were out there for. They made several successful outs at first base (as opposed to the first baseman missing the ball when its thrown to him). The pitchers they had were firing them in. The outfield was on it's toes (except for the one time when the ball landed between two outfielders and they both stood - each a couple of feet from it - and looked at it - and then when one of them finally picked it up they argued over who should have gotten it, instead of throwing the ball right away). The infield was at the top of their game.

Harry got the best hit he's gotten in years of little league. A fly ball far into left field. A double.

The other most exciting play of the game was the triple play our team managed to pull off. Bases were loaded, no outs. Kid hits a fly ball. Infielder catches it. Throws it to third, throws it to second and suddenly the inning is over. Whoa! That was exciting.

If you win all the time you get complacent. When it doesn't happen that often - it's thrilling - and these kids were on top of the world last night. And now they know what they're capable of. Let's see if they can do it again!
Posted by christine M at 11:00 AM 1 comment:

We've made it clear that there are words which are inappropriate to use, but we've never made that big a deal of it.

Pippi tells me that there are kids in her school who can't seem to have a conversation without using a hundred curses. The "f" word is a popular adjective I suppose. So, even though one would think she would be a little numb to bad words, when we were reading Shakespeare together and the quoted text she had to read said "Hell", she blushed and changed it to "heck."

One time Harry was upset about something (I don't remember what) and he looked at me and asked "Can I curse?" And I said yes. "Just this once." Because I know that sometimes when something really has you upset, it can kind of help to say something really bad. He looked shocked at my answer and then, real softly said (and I quote) "d word". Even given permission, he couldn't bring himself to actually say something bad (I was very proud.)

Lately though Harry has taken to "beeping". You know, pretending to curse but "beeping" himself out. So his sentences are littered with censored curses. But when I (after getting tired of constant beeping) told him that even though he wasn't saying the word, he was thinking about cursing, and he should try not to do that either, and he stopped.

As vinegar to the teeth, and smoke to the eyes, is the sluggard to those who use him as a messenger. (Proverbs 10:26)
Posted by christine M at 7:46 PM No comments:

After her Religious Ed. class tonight, Pippi was in a conversation with the Director of Religious Ed. and a family friend who is going to be starting up a youth band.

The Director of Religious Ed. was making the point that old style music and Gregorian chants are hard for kids to relate to. Even the traditional words of prayers, like the Hail Mary, don't reflect the way people talk anymore. She turns to Pippi. "When was the last time you used 'thou' in a sentence?"

And the family friend explained, "She's been reading Shakespeare."

So, yes - the last time she used 'thou' in a sentence was yesterday as we read The Taming of The Shrew together. She also has a tendency to occasionally speak Shakespearean English. But she understood the DREs point nonetheless.

Also at Religious Ed. tonight the director asked the assembled students if they knew what Alpha and Omega was. Pippi raised her hand. "The first and last letters of the Greek alphabet" and she knew that the Church used them to refer to God.

Of course it helped that two years ago I showed the kids this video - and it works, Pippi learned the Greek alphabet in ten minutes, and hasn't forgotten it.