Leo and Kristen - This One's For You 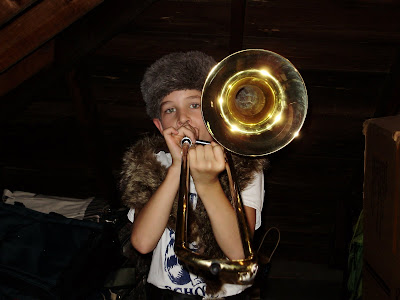 I went up to my parents' attic and what did I find? A young boy in a coon skin cap, a fur stole, a plastic holster on his hip, playing his uncle's old Trombone.

You just never know what you'll find in an attic.
Posted by christine M at 9:45 PM 3 comments:

The beginning of wisdom is the fear of the LORD, and knowledge of the Holy One is understanding. (Proverbs 9:10)
Posted by christine M at 9:06 PM No comments:

Instruct a wise man, and he becomes still wiser; teach a just man, and he advances in learning. (Proverbs 9:9)
Posted by christine M at 5:47 PM No comments:

The House on the Corner

Another original poem by Pippi in response to neighbors who moved out this weekend. They will be missed. And they lived in...

The House on the Corner
by KRM

The house on the corner
has been empty before
and it will be
empty again.
And new neighbors will
move in and out.

But the house
on the corner is
empty.
No lights are on.

That Makes as Much Sense as Anything

Harry - at breakfast this morning: Where's Wall Street? (the news radio station was on)
Me: In New York - but it's also what they call the businesses that deal with money and investments.
Harry: They only have 30,000 dollars left. (pause). After the robbery. (pause) Or something like that.

Yeah. Something like that.
Posted by christine M at 11:08 AM 5 comments:

And that's what I'm doing.... writing. I'm trying to use the tips PJ posted about awhile back and make sure that every page has tension. That every scene is useful. That everything my characters do make sense in the context of the story.

It goes a lot slower than you might think.

And in other writing topics - Pippi, who just last year thought she didn't like writing poetry - can't decide now if she likes writing poetry or fiction better. The advantage to poetry, she decided, is that she actually finishes a piece. She says she never seems to finish the stories she starts.

That's what we used to call them in math. Those problems that weren't as straight forward as a simple equation. Now they're called "Open ended questions." And they always end with "show your work and explain your answer."

I've got two kids. Both have very different approaches to math.

With Pippi (when she was Harry's age) she'd look at the word problem and pretty much give up immediately. "How can I be expected to know that?" Or come up with some solution that doesn't really involve math (not a real example, because I promised her I wouldn't share the most notorious of her solutions - but think along the lines of: if you have 25 apples and 5 people how much would each person get? and she'd come up with an answer like 'it would just be easier to make applesauce'.) I kept having to tell her that if the problem came from math class they probably expected numbers to be used in the answer.

Now for Harry - he sees the solutions to problems in his head. You give him a problem and he thinks about it for half a second and tells you the answer. Then you get to the point where it says "show your work and explain your answer." He says: It just is. How can you explain that? I can't do that. It's impossible.

That banging sound you hear is my head hitting the wall.
Posted by christine M at 7:50 PM 4 comments:

Reprove not an arrogant man, lest he hate you; reprove a wise man, and he will love you. (Proverbs 9:8)
Posted by christine M at 7:47 PM No comments:

As Speechless as She Gets

(Most talkative speechless person I ever met.)
Posted by christine M at 9:51 PM 1 comment:

My niece and nephew are gearing up to be the next hot cyclists. Check it out over at my Mom's blog, Morning Glory Alley.
Posted by christine M at 9:49 PM No comments:

Just in Case You Were Wondering

Silly Putty will stain bedsheets when inexplicably left between the sheets of a little boys bed over night. And will cause the sheets to clump together so that the orange stain from the Silly Putty gets spread around a lot.

Not that I have personal experience with this or anything. (And Harry insists he put the silly putty away - despite the obvious evidence to the contrary)

Middle school brings with it new challenges. Not the least of which is gym lockers. Pippi's locker apparently got the best of her today.

My Gym Locker
by KRM*
My gym locker is
small
gray/brown
OUT TO GE ME!
"Pssst!!" I whisper to
it
"Open up!"
I shake the locker.
Bam! Bam! Bam!
"GRR" I moan
Suddenly, I feel
the tug. I turn
it and it opens
"Yes!" I flush.
WHAM
The locker monster
grabs the door and
slams it shut.
I'm warning you
now, my gym
locker is
out to
GET ME!!!

*A note about attribution for Pippi's poems. I'm using my daughters real initials as a means of striking a balance between proper attribution and her privacy.

Harry is putting off doing a homework assignment (to be truthful he's been putting it off for hours, now he is actually finishing it).

He walked away from his paper and looking perplexed said to me "Wherever I look I see my nose."
(I told him it was because it was between his eyes - now get back to work)
Posted by christine M at 7:44 PM 2 comments:

He who corrects an arrogant man earns insult; and he who reproves a wicked man incurs opprobrium. (Proverbs 9:7)

I read this proverb and immediately thought of election campaigns. Can't imagine why.
Posted by christine M at 7:42 PM No comments:

Pippi has a love for fairy tales. And why not - there are a lot of good stories out there. She also likes listening to music from Broadway shows. So the other day she was listening to songs from Beauty and the Beast and started thinking about Gaston - the big guy who wants Belle to marry him. This is the poem that resulted.

Beauty and the Beast
By KRM

I was the big
Big man,
Muscular
Athletic, wonderful.
But she didn’t want me.
She fawned over
A beast locked
In a haunted castle
These years
What did he
Have that I
Didn’t.
Naturally, I started
Pressing her buttons.
But that made her
Hate me even more.
So then I set
Out.
Last straw.
Kill the beast!
A little lie here
A little blood there,
The benefit was mine.
The girl…mine!
But still,
My plan backfired,
Pushed off a
Tower. Landing
KERSPLAT
Down below.
And that was
My story.
My intentions
Started out
Good.
All I wanted was
Beauty
And
Instead got the
Brunt of the
Beast.

The round up is at Wild Rose Reader today. Head on over.
Posted by christine M at 8:13 AM 12 comments: 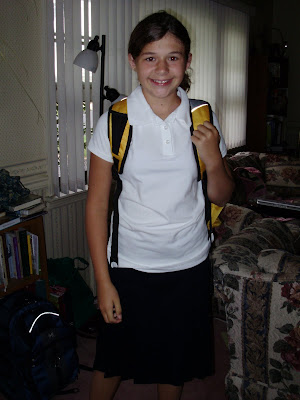 Pippi's all ready to go - dressed in the new school uniform (they have a choice of a few colors) and eager to meet her first day of Middle School head on. She had a successful day and will willingly return tomorrow. 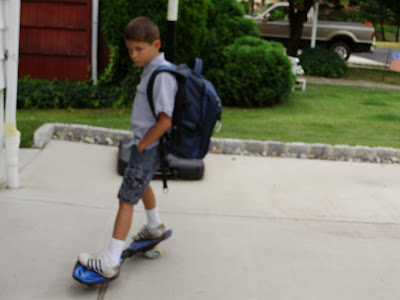 It was hard to get a picture of Harry standing still. He had a little free time before we had to leave so he rip-sticked around the driveway while he waited. Third grade is also off to a rip roaring success - a nice teacher and kids he knows and likes in his class - what more can you ask for really.

For by me your days will be multiplied and the years of your life increased. (Proverbs 9:11)
Posted by christine M at 4:30 PM No comments:

The Catholic Carnival is up and running this week over at just another day of Catholic pondering. Stop by and immerse yourself in some great thoughts and ideas.
Posted by christine M at 10:53 AM No comments:

School starts tomorrow and the kids aren't particularly thrilled with the idea - a few more months of summer would suit them just fine. Pippi put her thoughts to paper and asked me to post it.

So here are Pippi's thoughts on going back to school tomorrow.

My Doom is Approaching
by KRM

My doom is approaching
In 24 hours I'll be held
Captive in a strange lodging.

But perhaps I'll
run away and join
the pirates.
I'd call myself "Matey"
and I'd sit in the crows nest all day and....

Or I could wander into
Sherwood Forest.
I'd poach some of the King's deer
and get a grand old price on my head.
I'd run from the law and
play with rich merchant's money....

Or perhaps
I might grow a gigantic
beanstalk that stretches
all the way to the sky.
I'll climb it and
I'll meet giants, fairy folk,
unicorns, you know.

But, my doom is approaching.
In 24 hours I'll be at school.
But there's always the possibility
that I'll be held hostage by
a band of Native Americans....
(I have absolutely no adventure in my life.) 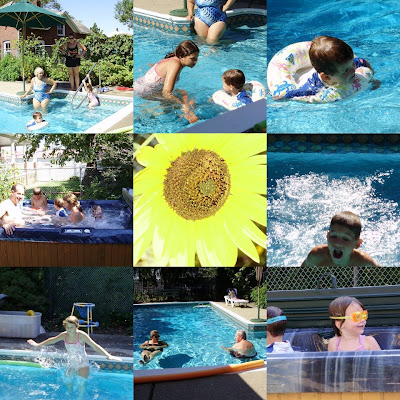 Summer's winding down, but that doesn't mean there wasn't time for a last get together at Ammy and Grampy's house for a swim in the pool (and the hot tub) with the cousins.

Oh - and sorry that I had to turn the comment verification back on. I was getting spammed.