Toys for the Ages

There's been a lot of talk lately in the kidlitosphere about kids and if they are being pushed to read books that are too advanced for them to early. Don't push kids away from picture books too early, is one bit of advice, let them enjoy things that are designed for their age. Some of the best links to this discussion are here at Jen Robinson's Book Page.
Then yesterday the kids got out the marbles and the marble machine pieces and were having a blast playing with them. "Maybe we can get another set and add to this," Pippi suggested. That's when I realized I had bought the set for Harry about 5 or 6 years ago when he was in pre-school. I considered it a pre-school toy - but they are having just as much fun with it now, maybe more, then they did when we first got it.

There are a lot of toys we've kept through the years (there are also things we've gotten rid of or passed down - space is rather limited after all.) Every now and then the kids get out the Thomas the Tank Engine set or all the Fisher Price Little People and have a blast. Pippi still loves playing with her doll house and setting the rooms up. And I even find her playing with the Barbies now and then (something she never actually did in pre-school.)

Our neighbors are always quick to throw things out (their house must be so much more organized than ours!) but their daughter was only about five when the play kitchen went out with the trash. All I could think was that she probably could have enjoyed that for several more years.

But are we too quick to move kids up and through toys. Give them Barbie when they're two and then by the time they are six they will feel too grown up for it. But do we really want our kids to feel too grown up for toys by the time they hit double digits? Isn't it as bad as pushing them past picture books as soon as they can decode words on their own.

People lament how children grow up too fast. But what if we didn't make it seem that once they were in school they were too old for dolls or trains? What if we encouraged them to play like kids even when they were well into elementary school - or beyond?

Just something to think about. 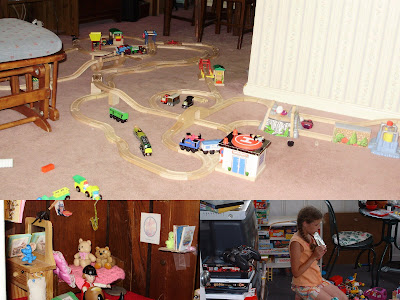 Oh, good point, Christine. I like this post a lot. Not having kids, I don't have anything to add, but I do think that getting rid of a 5-year-old's play kitchen is a bit sad.

Thanks, Jen. It is all part of the same thing. We lament that kids grow up too fast - but yet seem to do all we can to push them out of 'childhood' earlier and earlier.

I agree with you totally, Chris! We do try to push those toys earlier. Let them be kids.
And I have my play kitchen from 35 years ago which my kids love playing with, especially the 8 year old!

PJ - it's so easy to think we should purge the toys once a year to get ready for new ones (must always get new ones) - but really there's no reason to replace everything all the time. And some toys are better off at a later age.

We didn't bring my huge dollhouse here from my parent's house until Pippi was nine years old. This way it wasn't seen as a baby toy that's she's already outgrown - but something she can play with now.

Speaking as a mom and grandma I agree. Let the kids feel free to play what they want. I remeber when you were in first grade and had to write a paragraph about your favorite toy. You didn't know what to write about and I asked you what toy you played with the most and you said Fisher Price little people. And that's what you wrote about. I'd like to read that assignment now!

You didn't play with these the way a toddler would - you were creating characters and having fun - preparing for later in life!

Mom, I certainly don't remember writing about my favorite toy in first grade - but I do remember playing with the Fisher Price people until well into later elementary school (having all younger brothers helped keep those toys in the forefront)

Speaking as a kid and not analyzing toys from any psychological point of view or anything - I just think that toys are fun. Even toddler toys- which I am continuously amazed with.